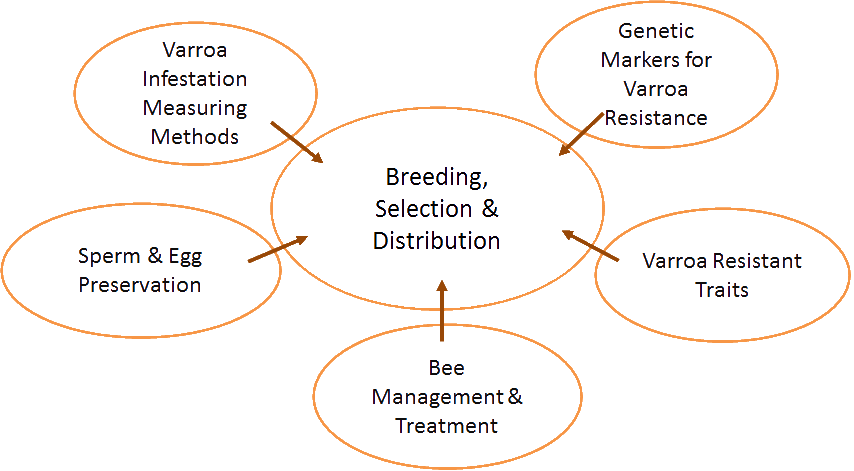 The kernel project, Breeding, Selection & Distribution (BrSD), will focus on selecting Carnica and Buckfast lines that have the “Varroa Sensitive Hygiene (VSH)” trait. Bees with this trait can detect and remove brood that is infested with Varroa. The United States Department of Agriculture (USDA) has shown that it is possible to select for his trait and have established a first VSH line. Also other Varroa resistant breeding initiatives will be supported in the kernel project.

There are 5 cornerstone projects. These projects can each make an important contribution to the success of the kernel project.

The following 5 cornerstone projects will contribute to better methods:

Counting Varroa’s in the brood (ABR)

3. Varroa Resistant Traits (VaRT): The Varroa Sensitive Hygiene (VSH) trait, removing infected brood, is the main characteristic for the selection of Varroa-resistant bees in the kernel project. However, there are also other adaptations the bees can make to counter the Varroa, such as grooming. This project will support initiatives that study these traits such as subsidizing a student at a relevant University group.

4. Bee Management & Integrated Treatment (BMaT): the overall objective, less treatments against Varroa and less mortality, would also be supported by improved control or better management methods. Especially methods that can be integrated with more Varroa resistant bees will be developed. In this project the effect of smaller cells and smaller bees will be studied in relation to Varroa resistance (by using self-built comb or artificial comb with a smaller cell size).

5. Sperm and Egg Preservation (SpEP): when a lot of valuable material is identified, the situation can surface that there is no capacity available to immediately test the material or ‘store” the material in the form of real colonies (which need to be cared for and of which the Queen should be replaced after 2-3 years). That is why the (International) breeding program (also that of others) can function better and easier when sperm from drones and eggs of Queens can be kept for later use (e.g. in liquid nitrogen). In this project there will be cooperation with institutes that not only have projects or have experience in the storage of sperm and eggs of bees, but also from other species (pig, chicken, etc.).

Guidelines for finding and assessing projects

The Arista Bee Research Foundation has a Scientific Committee which assesses new and ongoing projects and sets priorities. The Board and the Management are responsible for the operational implementation of and reporting on the projects. On the following pages a more extensive description per project is presented. The projects are currently being reviewed by the Scientific Committee.